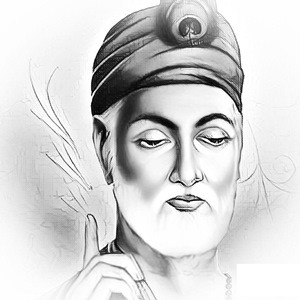 Kabir Das was a 15th-century visionary Indian poet and religious preacher who not only tried to eradicate the evils of casteism but also enriched Hindi literature with his didactic poems. Kabirji’s writings reflect his secular mindset and teach the basic principles of life.

Although there is no concrete evidence regarding Kabirji’s actual date of birth, it is universally accepted that he was born in the month of Jayestha on Purnima in the year 1440.

Hence his followers known as ‘Kabir Panthis ‘, celebrate his birth anniversary as ‘ Kabir Jayanti ‘, every year on Jyestha Purnima. In Islam ‘Kabir’ is meant great. There is no concrete evidence about Kabirji’s biological parents but according to the legends, it is believed that Niru and Nima found baby Kabirj in Lehartara, a small town in Varanasi.

Niru and Nima followed Islam. They jubilantly took the baby and adopted them as their son. Although they were extremely poor, they brought up Kabirj with utmost care and tenderness and later taught him their family business.

Kabirj was devoid of receiving any formal education but his spiritual knowledge was sound. Again, according to the legends once Kabirj approached Guru Ramananda to receive spiritual training but the Guru initially rejected and refused to make Kabirj his disciple.

But one day Guru Ramananda was going to take bathe in a nearby pond in the early morning and there he noticed that Kabirj was lying on the stairs of the pond simultaneously chanting ‘ Rama- Rama ‘.Finally, the Guru’s heart melted and he, without further delay, accepted Kabirj as his disciple.

Kabirji interpreted the meaning of spirituality in his way. Unlike his Guru Ramananda who was a devotee of Saguna Bhakti, he completely devoted himself to Nirguna Bhakti. To him ‘Rama’ was an absolute and pure Satchitananda and not the son of Dasaratha or King of Ayodhya—” Dasaratha ke ghar na janmey, yee chal maya keenha “.Above all, he never differentiated  Allah and Rama.

Sant Kabir, a pioneer of the Bhakti and Sufi movement in medieval North India, completed his life cycle in the region of Kashi  ( Banaras/ Varanasi).

He is often compared with his contemporaries like Farid, Ravidas, and Namdeva for his immense contributions to Bhakti Movement in India.

Kabirj rejected the prevalent ideologies of Islam and Hinduism and formed his distinctive religion based on ‘ Mokash’.In his opinion, the real way to unite with the Supreme Being is to tread the path of love and suffering.

Niru and Nima who adopted Kabirj were extremely poor and met the day’s end working as a weaver  ( Julaha Weaver). Back in 15th century India, almost all walks of people’s lives were strongly controlled by the Hindu Brahmin Orthodoxy. Even the learning centers were no exception.

There was no denying of the fact that these so-called low castes had to face discrimination everywhere. Thus, Kabirj felt that there should be no discrimination based on the caste- system and hence he started to preach his ideologies among the people irrespective of high or low castes.

He used to gather his followers and then preached different religious matters. Next, the so-called high caste Brahmins ironically mocked his attitude and endeavor as well. In contrast, Kabirj refrained from reacting. Therefore, his neutral attitude was liked by the common mass and hence Kabirj’s followers started to grow exponentially.

In addition to this, his powerful couplets or dohas written in simple Hindi added extra flavor to his religious preaching.

He never accepted the ritualistic methods as a means of salvation. In his opinion ‘ forgiveness and mercy ‘ are the two basic principles of life by which an individual can taste the never-ending nectar of life.

Sant Kabir was a devout follower and promoter of the ‘ Ashima'( the Endless). He always taught his disciples the genuine lessons of mortality, humanity, and spirituality.

He opined that one should not run away from his responsibilities but he should stay tuned to face difficulties. In this way, he or she could make his/ her life eternal.

In other words, he completely rejected the idea of ‘ Sanyasa’ in Hinduism and appreciated the value of family life. In Vedas, a similar reference regarding the importance of family life is found.

Kabirji’s preachings were similar to the Nirguna Sadhus who maintained a family life and at the same time, they chanted the name of God.

Kabir Das- A Hindu or a Muslim

However, after the demise of the legendary Sant, both the communities- Hindus and Muslims claimed the great saint’s dead body because they wanted to do the funeral of the sant according to their rituals and traditions. Whereas the Hindus wanted to burn the dead body, the Muslims wanted to bury him following the Mohammedan rites.

According to legends, the spirit of Kabirj appeared before the two combatant communities and said, ” I was neither a Hindu nor a Mohammedan. I was both. I was all. Remove the shroud and behold the miracle “.Surprisingly enough, when the sheet was removed from the dead body of Kabirj, it was found that there were only flowers instead of the corpse. Therefore, the two communities distributed the flowers between themselves and after that, completed the funeral according to their traditions.

By Doha is meant couplet. Couplets are two lines of verse that rhyme. Dohe are generally used in Hindustani poetry.

Kabirj wrote nearly 70 books. His books are generally collections of dohe and songs. His notable works are:

The great saint wrote all the books in the form of simple poetry. In a nutshell, he compressed the complex ideas into his simple dohe and couplets.

The great 15th-century Sufi poet, according to myth, had chosen the place of his death. He selected Magahar located 240 km away from Lucknow.

In those days there was a popular superstitious belief that people who breathed their last in the region of Magahar would never get a place in heaven. The great saint wanted to shatter the prejudice prevalent in society.

According to Hindu calendar the great sant passed away in 1518 at Magh Shukl Ekadashi in Magahar. The great saint justified his death in Magahar saying ” Kabira Kashi mue to rame kaun nihore ” i.e.Had it been so simple to get a place in heaven just by dying in Kashi, it was unnecessary to worship God”.

After his death, a Mazar and a Samadhi were built in Magaha.

A few meters away from the cave there is a Samadhi of the saint which bears the evidence of Kabirj’s meditation before his death.

Kabir Shodh Sansthan was established to work as a research foundation and to promote his works.