Tejashree Pradhan is an Indian actress. She acts mainly in the Marathi Television and Film Industry. She is best known for her roles in the Marathi Serials like Sun Mi Hya Ghachi(2013), Aggabai Sasubai (2019). She played the role of Janhavi in the former whereas she appeared as  Shubhra in the latter.

Tejashree pradhan was born on 2nd June 1988 in Dombivli near Mumbai. She is nicknamed Teju. She belongs to a Chandraseniya Kayastha Prabhu(CKP) Hindu family. Her parents brought her up keeping in mind that their daughter would surely make them proud one day. Her mother, Seema was her chief source of inspiration. Her mother used to say to her that recognition comes in handy with diligence and dedication. Her education started from Chandrakant Patkar Vidyalaya. Later she took admission to V G College. During her college days, she started to attend institutions where acting was taught. On the other hand, modeling fascinated her. As a consequence, her craze for acting led her to choose it as her career. Thus, she became a popular television actress. Moreover, her mother used to instigate her by saying that positivity is behind all success.

Keeping in mind her mother’s words she was able to establish herself as an actress in the glamour world. Her passion for acting compelled her to take training for becoming an accomplished actress just at the age of 15. She also completed a Personality Development course. Within a brief period of time, she got the opportunity to get launched on screen. She debuted in the Marathi Television Industry with the show ‘Hya Gojirvanya Gharat’ (2006-2010).In 2008, she played the role of Aditi in the series Tuza Ni Maza Ghar Shrimantacha. Next, she appeared in another Marathi Television serial Lek Ladaki Hya Gharchi . After that, She debuted in the Marathi Film Zenda in the year 2010. In this film, she played the role of Sandhya’s sister. In the same year, she shared screen in the movie Kartavya. Her zeal for acting moulded her properly from within. So, she could not refrain from acting. Therefore, it was quite natural that she started to get more and more opportunities in the Entertainment Industry. Above all, She is versatile in nature. In addition to her acting career, She worked as a  voice-over artist. In 2011, she appeared in another Marathi Film called Sharyat. There she played the role of Kanchan. In the same year, she was featured in a music video entitled  Sawali Unhamadhe(2011)opposite Swapnil Bandodkar.

She also acted in  several other movies like, Lagna Pahave Karun, Dr. Prakash, Asehi Ekada Vhave.In 2017, she played the lead role in the movie Saddhya Kay Karte. It was a Marathi Romantic Drama film. She was opposite Ankush Chaudhuri in the film. In the same year, she hosted a reality show entitled Sir Nava Dhyas Nava. Thereafter, she got the breakthrough in Bollywood with the movie

Babloo Bachelor. Then she appeared in the Marathi Television serial Aggabai Sasubai. Her role as  Shubhra in the serial made her a serial sensation.

In 2014 she got married to her Honaar Soon Mi Hyaa Gharchi co-star Shashank Ketkar. 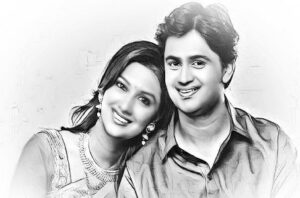 Unfortunately, the marriage was short-lived. In 2015 the couple decided to part ways.