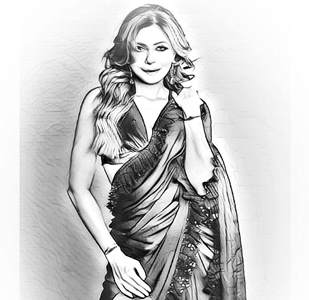 Kanika Kapoor is a well-known playback singer in the Bollywood film industry.

Kanika was born on 23rd March 1981 in Lucknow, Uttar Pradesh, India. Her father Rajib Kapoor was a business person and her mother Punam Kapoor owns a boutique shop. Her elder brother Sasha is a well-established businessperson. He is the owner of a London-based company. Kanika belongs to a Hindu Khatri family. Moreover, her father Rajib Kapoor and veteran Bhajan singer Anup Jalota were childhood friends. Kanika was admitted to Loreto Convent, Lucknow, Uttar Pradesh for her primary education.

In keeping with her passion, she chose music as the subject of her studies. Therefore, she completed her Bachelor of Arts in Music from Bhatkande Music Institute. She also pursued her Master’s in Music from the same Institute.

Music, as if, rushed in Kanika’s veins from her early childhood. In fact, she started to learn classical music just at the age of 12 under the guidance of her Guru Pandit Ganesh Prasad Mishra. In a brief period, she mastered classical music and started to appear in various concerts all over India. During her school days, she participated in numerous music competitions and people appreciated her performance. She is not only good at singing but is good at dancing also.

In 2012 she lent her voice to the song Jugni Ji in which Dr.Zeus and Shortie got featured. The song was a remix version of the original song ” Alif Allah ” sung by Arif Lohar and Meesha Shafi. The song became a massive hit in 2012. She received  Brit Asia TV Music Award for Best Playback singer. After that, she embarked on a whole new journey. In 2014 Meet Bros. approached her for singing the song ‘Baby Doll ‘ for the movie Ragini MMS 2 and she, without much hesitation, agreed to their proposal.

Her debut song in the Bollywood film industry literally caused a commotion among the public. As a result, she became popular overnight. She received Mirchi Music Award for the song. Above all, she was applauded for her unique single style and therefore, she won several awards including the Film Fare award for best female playback singer. Again in 2014, she collaborated with Dr.Zeus and Vishal, and Shekhar for the song ‘Lovely ‘ (in the movie Happy New year). Deepika Padukone got featured in the song. In the same year, she left for North America to attend a concert entitled “SLAM! The Tour “.

Apart from singing Kanika also works for the betterment of underprivileged children. She is made an ambassador of an NGO. In the year 2015, she sang a welcome song for the Honourable Prime Minister of India Mr.Narendra Modi who was made the chief guest of the Indian Community in Wembley stadium, England.

With the passage of time, Kanika started to produce back-to-back Superhit songs and therefore she started to become popular nationwide. Her songs such as ‘ Chittiyaan Kalaiyaan‘ for the movie ‘ Roy’, ‘Desi Look ‘ for ‘ Ek Paheli Leela ‘ became contemporary hits. The year 2015 proved to be her best so far as her singing career is concerned. Her songs like- Neendein Khul Jaati Hain ( Hate story 3/ 2015), Premika ( Dilwale/ 2015) were released in the year. In 2016 she sang ‘ Da Da Dasse ‘ for the movie Udta Punjab followed by Hug Me ( Beimaan Love), Luv Letter  ( The Legend of Michael Mishra) & Beat Pe Booty  ( A Flying Jatt). In 2016 the Swiss Watch Manufacturer 88 Rue du Rhone made her their brand ambassador. She was also a judge of the singing Reality Show The Voice ( Season 3)

Kanika married Raj Chandok, an NRI business person in 1998. Then she moved to London with her husband. The couple was blessed with three children. But unfortunately, their conjugal life was short-lived. In 2012 they got divorced and Kanika returned to Lucknow.

Kanika has a net worth that is estimated at around 5 million USD.

One thought on “Kanika Kapoor Biography Husband Net Worth”