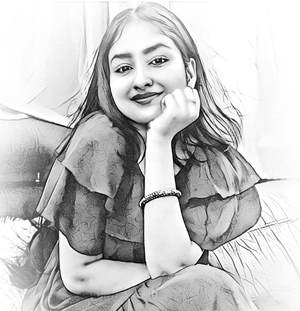 Anchal Sahu is an Indian Television personality and model. She rose to prominence with her lead role as Bondita Das in the Colors TV show Barrister Babu. She has also endorsed big brands like Bikaji Rasgulla, Ferrero Rocher, and many more.

Anchal Sahu was born on 18th March 2005 in Mumbai, Maharashtra, India. Her parents gave her a happy upbringing and good education in her own home town Mumbai.

Her father Dwarikanath works in Aristo Pharmaceuticals Pvt. Ltd. and her mother Kavita Sahu is a housewife. Her elder sister Anjali Sahu is pursuing her MBBBS degree. Anchal considers her elder sister to be her friend, philosopher, and guide. She frankly admits that her elder sister encouraged her a lot to progress smoothly in her career. Moreover, her father occupies a conspicuous place in her heart and she often calls him Superman. On the other hand, her mother is her perpetual source of inspiration. Anchal is a sincere student. She opted Science stream in 11th Standard and is presently attending all her classes online because of Covid 19. She scored 93.40 percentile in her 10th standard Exam. She hails from a nonfilm background.

When Anchal was just 6, her maternal uncle posted her picture on Facebook. Her cute looks attracted the attention of one of the advertisement directors. He invited her for the audition in his AD agency. As a result, she got featured in a video alongside Sachin Tendulkar to cheer the Indian Cricket Team for the 2011 ICC World Cup.

In the same year, she was spotted in the show Ek Hazaro Mein Meri Bahana Hai. After her first success in the TV Industry, she auditioned for several roles but failed to get selected. Meanwhile, she appeared in minor roles in various TV serials like Savdhaan India, Begusarai, Lajwanti, Meri Durga, Shakti Peeth Ke Bhairav, and many more. In 2019 she debuted in the Bollywood film industry with the movie Mardani 2 . She played the role of Briz’s daughter. Thereafter, she appeared in MX Player Originals Web Series Girlfriend Chor. Then in the lockdown period  (started 23rd March 2020), she auditioned for Sony TV’s Show Utthe Dil Chhod Aaya. Finally, she got selected for the lead role of the show. She played the character of Vashma Baig. Her acting immediately grabbed the mass’s attention. After that, she was chosen for the role of Bondita Das in Barrister Babu. Again, she did justice to her role as Bondita Das by acting naturally onscreen.

Anchal and Pravisht Mishra are going to get featured in the sitcom entitled Parineeti  ( Colors TV/ from 14th February/ Monday to Friday 10 pm IST.)