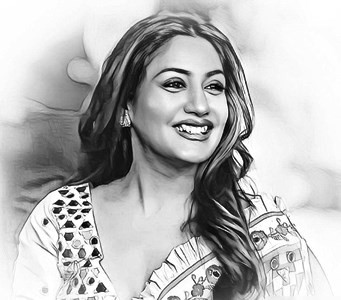 Surbhi Chandna is a well-known Indian actress. She is famous for appearing in several TV serials like”Ishqbaaaz”, “Sanjivani”, “Naggin 5” etc. On social media also, she is a familiar face. More than a 3.4million people follow her on Instagram.

Surbhi was born on 11 September 1989 in Mumbai, Maharashtra. Her father is CP Chandna and her mother is Sashi Chandna. She has a little sister also.Her name is Pranavi Chandna.

Surbhi debuted in the entertainment industry in 2009 with the role of Sweety in the most entertaining comedy series,” Taarak Mehta Ka Ooltah Chasma”, aired on Sony SAB. Due to some anonymous reasons, she remained invisible on the silver screen for the next four years. After that, in 2013, she reappeared in the role of Suzanne on Star Plus’s “Ek Nanad ki Khusiyan Ki chaabi, Meri Bhabi “.From 2014-to 2015, she appeared in the supporting role of Haya, who was a deaf and mute girl in the romantic drama entitled  “Qubool Hai”.The show was broadcasted on Zee TV. In the following year, she stepped into the Bollywood industry with the small role of Aamna Khan in the movie “Bobby Jasoos” in which the famous actress Vidya Balan had the lead role. Besides, she was seen as Sia in “Aahat” in the same year.

In 2015, she appeared on Star plus’s “Ishqbaaz” where she got the role of Ambika Oberoi opposite Nakul Mehta. This serial uplifted her career. For her outstanding performances, she has also won several awards including Indian Television Academy Award, Asian Viewers Television Awards, Gold Awards, and Lions Gold Awards. Up next, she got the chance to act in “Dil Bole Oberoi”, the sequel to “Ishqbaaz“.The role of Dr.Ishani Arora in Star Plus’s ” Sanjivini “(2019) and Bani Singhania in Color’s TV “Naggin 5”  helped her reach the next level. In “Naggin 5″, Surbhi was opposite Sharad Malhotra who had the role of Aadi Naggin.

She was a participant in “Nach Baliye 9 and “Bigg Boss 14″ in 2019 & 2020 respectively. She was also a guest as well as a challenger in “Bigg Boss 15” in 2021. In the same year, she was seen in a music video with Sharad Malhotra with VYR Originals. Now, she hosts the Show “Hunabaaz“, replacing Bharati Singh.

Due to her excellent performance on the silver screen, Surbhi has got numerous awards . She was nominated in 12 different categories, but she managed to win  9 categories. In 2017, Biz Asia selected her in the 7th rank in the 2017 TV persy list. She was ranked 16th and 5th in “Eastern Eye’s Sexiest Asian Woman List respectively.  Besides, in Biz Asia’s TV personality test, she acquired the 8th rank in 2018 and was crowned the 1st two times in 2019 and 2020. Even she holds the 9th rank on the list of Top 50 Asian Celebrities in the world by Eastern Eye. Moreover, she has upgraded herself to No.4 in the Times Most desirable women on TV in 2020.

Surbhi is engaged to Karnn Sharma, a successful businessperson. According to sources, they have been in a relationship for more than 8years. Currently, the Ishqbazz actress wished her lover on his birthday by sharing a post of her with Karnn on Instagram.