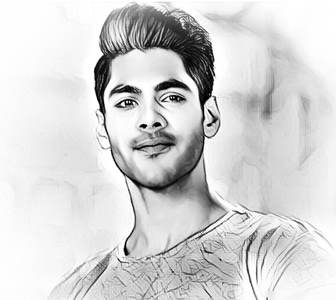 Simba Nagpal is an Indian model and Television personality. He works chiefly in Hindi Television Industry. Above all, he is best known for his role in Splitsvilla Season 11. Shakti: Astitva Ke Ehsaas Ki is the best tv serial of Simba Nagpal Serials.

Simba lost his father at a very young age. His mother Joyti Nagpal brought him up.

When he was just 12, he lost his father. His father was a national-level boxing champion. Simba faced economic paucity in his childhood due to the absence of his father and struggled a lot to enter the threshold of the school. Finally, he managed to complete his schooling from Sushant School of Art and Architecture. After that, he pursued his graduate degree from Ansal University, Gurugram.

Since his childhood, he dreamed of becoming an actor and as a consequence, he worked enthusiastically to turn his dream into reality. When he was still studying in his college, he set foot in the glamour industry as a model. On weekends he used to go to Mumbai to do his contract-signed works. He got featured in numerous modeling shows and walked in ramps for many big brands.

Simba’s ambition in life was to become an actor and hence after completing his graduation in Gurugram he decided to leave New Delhi. He came to Mumbai and within a very short time he got the opportunity to debut in MTV Splitsvilla Season 11, a dating reality show aired on MTV. In the program, he shared the screen with Puneet Kumar, Anshula Dhawan, Anushka Mitra, Aarushi Handa, Karan Monacha, Chetan Teitre, Kabir Bhartiya, Aarushi Dutta , Monal Jagtani, and Myra Mishra. Simba’s handsome appearance and charming personality made him ladies’ favorite. In the show, the chemistry between Mira and Simba was mostly eye-catching. Rannvijay Singha and Sunny Leone were the hosts of the show. The winner of the show was shruti Singha. Then he auditioned for MTV’s reality show Roadies, real heroes  (2018). Although he impressed the judges, he failed to bag any prize from the show.

In 2019 Simba signed a contract for playing the role of Virat Singh in the TV serial ‘ Shakti: Astitva Ke Ehsaas Ki. Rubina Dilaik, Vivian Dsena, and Jigyasa Singh were also part of the show. The serial was produced under the banner of Rashmi Sharma Telefilms. The serial was aired on TV from 30 May 2016 to 1 October 2021. But suddenly the show was stopped and Simba decided to leave the show. In 2021 he again auditioned for Big Boss as a contestant and ultimately got selected.

Ekta Kapoor is going to feature Simba in her famous TV serial Naagin 6 . He will be seen in a dual role – both hero & villain. He might be seen in a supernatural avtaar in the show.

Simba acted in the movie ‘ Bhayam  (2019) directed by Veer Narayan. The movie was a horror thriller.

He has a net worth that is estimated at around 1.2 million USD.