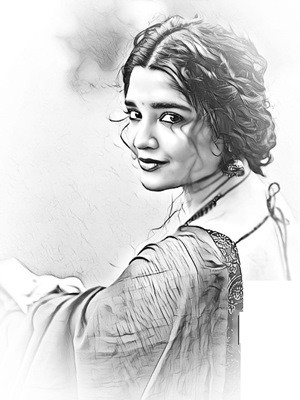 Ritika Mohan Singh (Ritika Mohan)  is a famous Indian actress who mainly works in Tamil, Telugu, and Hindi films. She is also known as a former mixed martial artist. For her excellent performance in the films, she got Filmfare Awards thrice. Some of her famous movies include “Irudhi Suttru”,” Guru”, “Shivalinga”, “Neevavaro”,” Saala Khadoos” etc.

She was born on 16 November 1993 in Thane, Maharashtra, India. She is now 29 years old. No information is available regarding her family and parents. Sources state that she had a long-cherished passion for kickboxing and mixed martial arts since childhood. Her father (name not known) guided her very attentively.

At the age of 14, she participated in the “2009 Asian Indoor Games”. Then, in 2012, she took part in the “Super Fight League”. Here, famous director Sudha Konkona Prasad spotted her and after an audition, in 2016, she made her film debut with the film” Saala Khadoos”, directed by  Sudha.

Here, she played the role of Madhi, a Marwari Boxer Girl. In the same year, she got the role of Ezhil Madhi in the Tamil version of the film “Irudhi Suttra”. This film uplifted her to the summit of success. After that, in 2016, she also featured the role of Karmgha Kuzhali in another Tamil film” Aandavam kattlai”, directed by Manikkamadan.

Thereafter, she debuted in the Telugu movie “Guru”, which was the remake of “Irudhi Suttra “in the Telugu language. In that year, she also appeared as Sathya in the Tamil comedy film “Shivalingya”, directed by P. Vasu.

Her next released movie was “Neevevaro”(Telugu), where she had the role of Anu. Up next, in 2020, her performance as Anu Paulraj in the film  “Oh My Kadavule” smoothened the path of her journey. Recently, (since 2021), she has been filming the movies such as “Boxer”,  “Pichaikkran 2”.

Singh has achieved many awards for her outstanding acting skills. For the film” Irudhi Suttru”, she got three awards–” National Film Award-Special Jury Award”, “Ananda Viketan Cinema Award” in the category of Best Actress & “IIFA Utsavan for Best Actress”.

In the same year, she also received the “Filmfare Award “for  Best Female Debut and the” Zee Cine Award “in the same category. In the following year, she won the ” Filmfare Award” for Best Actress- Tamil and the “SIIMA Award” in the category of Best Debut Actress for the movie” Irudhi Suttru”.

In 2018, the film “Guru” gave her “Filmfare Critics Award” for Best Actress “South and Zee Golden Award “for Best Find of the Year.

According to sources, she has a net worth that is estimated at around 3-4 million USD (approx).