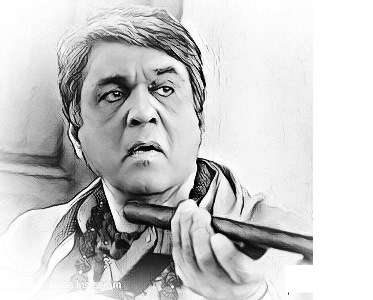 Mukesh Khanna, the heartbeats of 90s kids, is an Indian actor and producer. He also works in Hindi films and Television serials. He is best known for his onscreen appearance as Shaktiman, an Indian superhero Television show. He was also the chairman of Children’s Film Society India but in 2018 he resigned.

Mukesh was born on 23 June 1958 in Mumbai, Maharashtra, India. He was also brought up in Mumbai. He came of a Hindu Khatri family. He had an elder brother named Ved Khanna( died in 2018). Again, he also had an elder sister who also died after suffering a lot from Covid19. He completed his schooling at a renowned school in Mumbai. Thereafter, he took admission to St. Xavier’s College, Mumbai to pursue his higher studies. After that, he went to the Film and Television Institute of India (FTII), Pune. He is a science graduate.

Since his childhood days, Mukesh dreamed of appearing on the Silver screen. He started his career with television serials. Right at the beginning of his career, he got the chance of appearing in major roles. He played the role of Bhisma Pitamaha in B.R.Chopra’s immortal creation Mahabharat. The serial ran on DD National from 1988 to 1990. In 1990 he got another role for the serial Chunni where he acted as Karamjit Singh.

The story of the serial was about two brothers and their family members. Then he appeared in Chandrakanta (1994-1996). The show was broadcasted on DD National. There he played the double role of Janbaaz and Meghawat. This serial was later broadcasted again on Star Plus and Sony Entertainment Television. Vishwamitra was a television serial where he appeared in the lead role of  Vishwamitra. In between 1995-and 1996 he showed up in two serials entitled  Marshall and Saraab.

Then he acted in Sunil Agnihotri directed Television Serial Yug (1996-1998) which was aired on DD National. In 1997, he produced a serial named Mahayoddha. He played the lead role of Virat there. Then came his dream project Shaktiman, a superhero Television Show in the same year. This Show in particular earned him fame and reputation.

He was the producer of the show. It was a long run serial – 1997 to 2005. Besides appearing in the lead role, he showed up in many roles like Pandit Gangadhar, Vidyadhar Mayadhar Omkarnath Shastri, Major Ranjit Singh, Shree Satya, etc.

In 2002 he produced another superhero Television Show Aryamaan – Brahmaand Ka Yodha. It was also famous but failed to match Shaktimaan’s popularity. In this serial, he played the lead role, Aryaman. Next in 2003, he was seen in two serials entitled Deewar and Ehsaas. After a long gap of three years, he produced the television serial Sautela. He played the role of Nikram Arya. Next in 2008, he appeared in two more serials named Kal Hamara Hai and Waqt Batayega Kaun Apna Kaun Paraya.

The former one was aired on DD National where he was seen playing the character of Professor Vimal Kant Vishnoyi and the latter Waqt Batayega was broadcasted on  Sony Entertainment Television. The story was all about a girl whose name was Rudra. She witnessed hardships in her life due to her poor family condition. Mukhesh had the role of Biswajeet Roychowdhury to play in it.

Mukhesh did not lag behind from appearing in movies. He has a lengthy film career. What he has achieved in his life is all because of his dedication and hard work.

Then in the next year, he acted in Mujhe Kasam Hai. He played the lead role opposite Talluri Rameshwari, a famous Indian actress. After a few years’ gap, he appeared again in 1991 with the two movies. They were Saugandh and Saudagar. In Saugandh he signed for the role of Chaudhary Sarang and in the movie Saudagar, he was Gagan. Saugandh was a crime-related movie whereas the storyline of Saudagar was based on William Shakespeare’s romantic tragedy Romeo and Juliet.

In 1992, he acted in another two movies entitled Tahalka and Yalgaar. Tahalka was an action film where he portrayed the character of Major Krishna Rao. On the flip side, other actors in the movie were Dharmendra, Naseeruddin Shah, etc. The movie was made on the basis of the Hollywood movies The Guns of Navarone and Where Eagles Dare. Yalgaar was also an action thriller. He played the role of Mahendra Ashwini Kumar there.

1995 was the era when he acted in more than thirteen movies such as Police Lock-Up, Hukumnama, Pathreela Rasta, Jawab, Paandav, Maidan-E-Jung, and Policewala Gunda, Nazar Ke Samne, Raja, Taaqat, Guddu, etc. In 1996, he acted in movies like Jagannath, Himmat, and Himmatwar Bal Brahmachari.

In 2014, he acted in Ardha Gangu Ardha Gondya, a Marathi Film produced by Rishiraaj Production. Another film of 2014 was Rajdhi Raja where he acted as Sikander. Last but not least he acted in Money-Back Guarantee, a comedy movie. There he played the role of God.