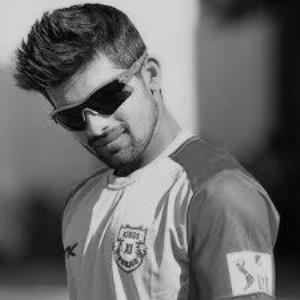 Manan Vohra is an Indian Cricketer who played domestic matches for Punjab at an early age. He was then an opening batsman. Later, he was seen appearing in IPL 2013 for Kings XI Punjab. Up next, he became popular as a right-handed batsman and right-arm medium-fast bowler.

Manan was born on 8th July 1993 in Chandigarh, India. He belongs to a middle-class family. His father Sanjeev Vohra gave him a happy upbringing and good education. Manan’s grandfather Yogesh Pratap Singh was a former Indian Hockey player. Now he is the  General Secretary of Chandigarh Cricket Association. He was very obedient to his grandfather and also got inspiration from him. Manan started his early education at Guru Nanak Public School. At School, he began to play cricket whenever he got the opportunity. In addition to playing cricket, he also studied in many other institutes like Hansraj Public School, Satluj Public School, and Bhavan Vidyalaya, Sect 27, Chandigarh. Finally, he completed his graduation from DAV College, Sect 10, Chandigarh. When he was young, Harminder Singh used to coach him. But at present, he is coached by Yograj Singh, the father of Yuvaraj Singh.

In his early days, Manan could not decide what he would become in the future. A confused Manan followed his grandfather, a former hockey player. But eventually, he got rid of the dilemma and chose cricket as his only career option. Gradually, he started to score runs in age-group cricket, and thus, destiny led him to get selected in Punjab Under 16 Team. Later, he was made captain of the Punjab Under-19 team and under his captaincy, the team won the Vinoo Mankad Trophy. During the Ranji Trophy (2013-14)Manan scored 187 runs with 24 fours and 3 sixes.

Now  Manan became a batsman in the truest sense of the term. In April 2013 he made his debut for Kings Xi Punjab. He scored 161 runs in the season. After that, the 2014 IPL season was his individual best. He scored 324 runs in 8 matches. He made 67 runs against Kolkata Knight Riders. Everyone was awestruck watching his performance. Again, in 2017 he alone scored so well that his team could almost taste the joy of victory but ultimately they failed.

In 2018 Royal challengers Bangalore bought him with RS 1.1crores. Again, in 2019 he was bought by Rajasthan Royals with a salary of INR 20 lakhs and retained for IPL 2020.

In 2022 Manan’s base price was 20. lac and Lucknow Super Giants bought him.