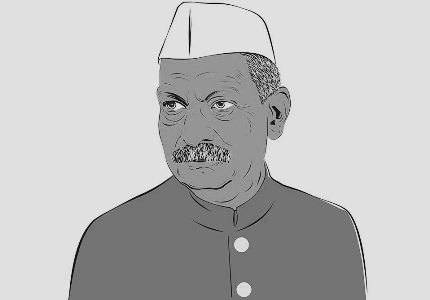 Dr. Rajendra Prasad (3 Dec1884-Feb 1963) was a revolutionary Indian freedom activist, lawyer, and author. He is also remembered as the first president of independent India.

Rajendra Prasad was born on 3rd December 1884 in the Siwan district of Bihar, India. His father Mahadev Sahai Srivastava was a scholar. He had mastered both Sanskrit and Persian languages. on the other hand, his mother kamleshwari Devi was a pious lady and a homemaker. Rajendra Prasad was the youngest son of his parents.

He had three Sisters and an elder brother. As Dr. Rajendra Prasad belonged to a very well-educated and cultured family he received a quality education from his parents. At an early age, he was taught Sanskrit, Persian, and mathematics by different teachers. Later, he also attended the P.K. Ghosh’s Institute along with his elder brother Mahendra Prasad.

At first, Dr. Rajendra Prasad went to Chapra district Zilla High School to complete his traditional elementary School education. In the meantime, at the age of 12, he married Rajavanshi Devi. Then he attended T.K.Ghose’s Academy in Patna for a brief period. Later, he sat for the entrance test of Calcutta University and finally succeeded in securing first place in the entrance examination. He was also awarded rupees 30 per month as a scholarship.

As mentioned earlier he married Rajavanshi   Devi at the age of just 12. It was a common practice in the then India to get married early. Rajavanshi Devi and Rajendra Prasad had a son whose name was Mrityunjay Prasad.

The name of Rajendra Prasad’s son is Mrityunjay Prasad.

Rajendra Prasad was a brilliant student. When he was admitted to Calcutta University, he initially started to study science but later he changed his stream from Science to arts.

He now started studying Economics. While studying at the University he used to stay at the Eden Hindu hostel with his elder brother. In 1908, he played an instrumental role in establishing the Bihari student conference.

In 1900 Babu Rajendra Prasad was awarded the gold medal for excellence in his studies. After graduating from Calcutta University he went to Muzaffarpur to complete his post-graduation. In the meantime, he joined Langat Sing College, Muzaffarpur in Bihar as an assistant professor in English and later became its principal.

In 1909 he left the College and again returned to Calcutta University to pursue his studies in Law. while he was studying law at the University of Calcutta, he was also stipulated to teach economics at the same University.

In the year 1915, his master’s in law was completed and then he went to Allahabad University to pursue a doctorate in law. In actuality, he had a keen interest in studies and hence he went on to study further.

Finally, in 1911 he started practicing law at various courts. He officially joined the Patna High Court in 1916. Furthermore, he continued his law practice in Bhagalpur, Bihar. The fact that Babu Rajendra Prasad had an insatiable thirst for foreknowledge was mentioned earlier. He now started trying to get more advanced degrees.

Gradually, he started to gain immense popularity in his area. People started to love his qualities such as his intellect, integrity, proficiency, and efficiency.

Babu Rajendra Prasad’s love for his country was generated from the core of his heart. His entry into politics was not fashionable. In 1906 he attended the Calcutta session of the Indian National Congress and formally joined the party in 1911. He was greatly influenced by Mahatma Gandhi’s Champaran Satyagraha in 1917. Meanwhile, he was elected as an important member of the Indian National Congress. Then he accompanied Gandhiji in his Satyagraha Aandolan.

The Champaran province of Bihar, India was plagued by the indescribable sufferings of the Indigo farmers.

The Teen Katiya system made the farmers’ life miserable. Rajkumar Shukla requested Gandhiji to come and visit Champaran Bihar to look after the problems of the Indigo farmers.

He used to organize public meetings, inspire people, and instilled patriotic feelings in them. He toured all over the state and inspired people to boycott foreign goods. He even advised his son Mrityunjay Prasad to leave the university and to admit to Bihar Vidlayay with his friends.

In 1921 he established a National college in Bihar. As a devout follower of Gandhiji, he advised his fellow countrymen to wear swadeshi garments. In the meantime, he was elected as the president of the Indian National Congress( October 1934 Bombay session).

Later, he was also imprisoned for his Swadeshi activities which were considered illegal by the British Government. he was sentenced to 3 years of imprisonment. Finally, on 15th June 1945, he was released from jail. In 1949 Babu Rajendra Prasad distributed food and necessary items to the flood victims. Then on January 15, 1934, while he was still in jail, he formed a committee to help people who were in distress.

His welfare committee collected more than 37 lakh rupees. Meanwhile, an earthquake( magnitude 8) hit Balochistan province and Babu Rajendra Prasad tried heart and soul to help the victims but he was restricted by the contemporary British government.

Babu Rajendra Prasad witnessed Gandhiji’s strict and austere Lifestyle and, thereby,  got very much influenced by it. He became an ardent admirer of Gandhiji. Rajendra Prasad Ji gave up his profitable law practice to serve the nation. In 1946 Jawaharlal Nehru formed the interim government and then Babu Rajendra Prasad was made the food and agriculture minister.

He traveled around the world and met various world leaders to build a diplomatic relationship with India.

In September 1962 his wife Rajavanshi Devi passed away. Soon Babu Rajendra Prasad’s health started to deteriorate. On May 14, 1962, he resigned from his present post and returned to Patna. The same year he was awarded the Bharat Ratna, India’s highest civilian award. He spent the final months of his life at the Sadaqat Ashram in his hometown Patna. Finally, he breathed his last on 28 February 1963.

The entire nation is indebted to this great man for his role in India’s independence.